Nine months old already! Where does the time go? I can’t believe he’s this old, or how much he’s changed in the last month. All of a sudden he’s an independent little boy with a mind of his own. I cannot cope! I’m so proud of him but also a bit sad that’s he’s changing so quickly, I can barely remember him being so little and helpless! I love watching him grow and learn though and this month has been jam backed with developments, there is no filler in this month’s update! 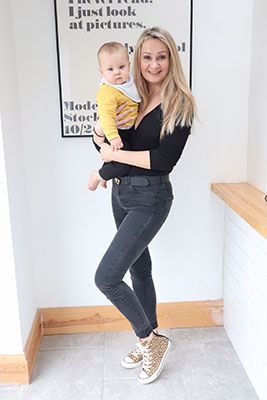 Theo got a chest infection just before Christmas so was really off his food and milk. He lost about 200g because of it so I’ve really been trying to fatten him up again since.

We saw the dietician this month after being referred because of his food allergies. She was largely happy with his diet but recommended introducing some lentils into his diet for protein so I made him some lentil dahl from the SMA weaning app which he loved. She also recommended making his porridge with formula because he won’t take it from a bottle and, before he got ill, I was trying to transition him from breastfeeding before I go back to work. She also suggested trying him with a bottle of formula mixed with oat milk which has worked ok, he’ll take about 100ml. With him being poorly I stopped the bottles and breastfed him all the time again but now he’s better we’re starting again. He’s having formula in his porridge rather than a morning feed and I’ve already swapped out his afternoon feed and then next will be the midmorning feed.

He’s been having coconut yoghurt pouches after meals a couple of times a day and I also made some couscous fingers that I adapted from a Pinterest recipe that he’s really enjoying.

He has been getting a bit fractious and bored at mealtimes so we’ve been putting ABC Kids on Youtube on for him. Shapes Song 2 is his favourite and he’ll eat all his tea while watching it. I don’t feel bad because it’s educational and he’s eating! 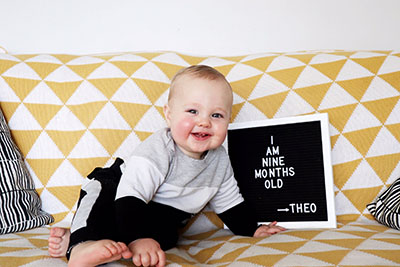 Last month we still had no teeth, in the last month FOUR TEETH have come through! All four of his front teeth have come through in his ninth month! He was a superstar with it as well, besides a red cheek and a lot of dribble he was in really good spirits and it didn’t really disrupt his sleep at all! I’m sure that won’t last, his top teeth have quite a gap between them so I think when the others grow in they’ll all push together so that everything is aligned which sounds quite painful so I’m not counting any chickens! I’m just grateful that this first set didn’t hurt him too much.

Theo’s a lot more confident with babbling and makes clear “dada” sounds although he doesn’t know what that means. He’ll repeat back when you make some noises at him and will have a conversation in sounds. He also understands some words – the cutest is if I say “lights” in the morning after I’ve got him out from his cot before I turn the lights on, he buries his face in my shoulder so that the lights don’t blind him!

I do worry that he’s a bit behind with communication, he doesn’t say any words (no matter how many times I say “Mama” to him!) and he isn’t waving or clapping or anything. I have no evidence to suggest he is behind but I am prone to worrying! He’s advanced in his gross and fine motor skills though so I guess he can’t learn everything at once! I read to him lots and I’m always talking and singing to him so I’m hoping that will all pay off soon.

For the majority of the month everything was still pretty good, he was only waking up once at night usually between 3am and 5am and then he slept in until 8am most days! He was awake for three hours at a time during the day and then would nap for between 35 minutes to an hour and 15 minutes twice a day, then he’d be awake for about four hours before bedtime. Unfortunately, the chest infection messed that up a little – night time wasn’t too bad, he was still only waking up a couple of times but we had to go back up to three naps because he was tiring very quickly. His naps did get a bit longer because he was trying to fight off the infection.

We’re now trying to transition back to three hour awake times and are nearly there and he did go back to waking up once in the night. 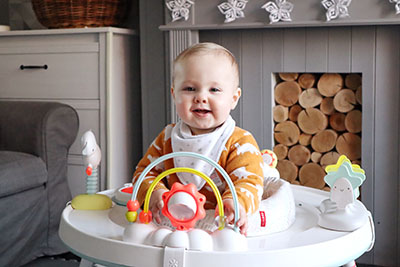 Theo’s really interactive at the minute, his favourite toy is his V Tech Activity Table he loves pressing all the buttons and twiddling the dials. It has a huge variety of sounds on it too. We’ve lost the phone though, it’d be better if it had a cord attaching it, I have no idea where it’s gone! On the cheaper end of the spectrum, his other favourites are his stacking cups but he prefers for us to play with those with him, we build the tower and then he dismantles it or knocks it down!

He’s also loving the Usbourne That’s Not My… books as well as the 10 Little… books at bedtimes.

Phew! It’s been a BIG month! I can’t wait to see what next month brings for us! I can’t imagine it will be as eventful as nine months has been but you never know!

What was your baby’s biggest month? Did you find everything happened at once or it was more spread out? I’d love to know!

Why Keira Knightley is Wrong for Banning Disney Films