I’ve seen the Wander and Hunt DIY kits feature on a few blogs and when I checked out their site I was really impressed with the projects they have. The Wander and Hunt DIY Statement Gem Necklace Kit is a collaboration with blogger SwellMayde. Statement gem necklaces are having their moment but I liked the idea of having one that I’d made myself and that I was unlikely to bump into anyone else wearing.

There’s the option to buy the kit with or without jewellery pliers, I didn’t have any (I’ve never made any jewellery before) so I opted for them to be included. Whilst the kit contains almost everything you need, you’ll also need some scissors (I used nail scissors with a curved end, they proved really hand for cutting round the edges of the jewels). I also freestyled it a bit and used tweezers to position the jewels, acrylic nails aren’t the best for fine detail work! 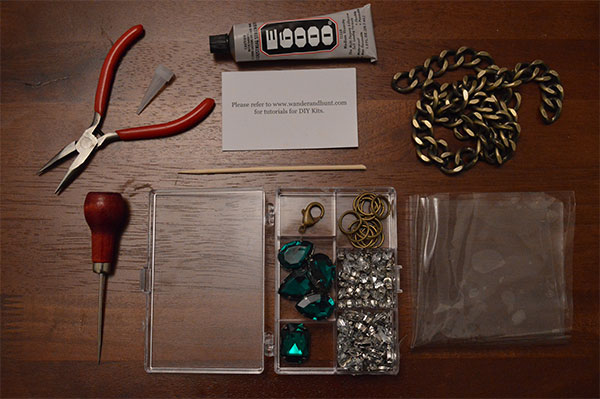 The tutorial for putting the kit together is on the Wander and Hunt site so I’m not going to bore you by repeating the details, I did take some photos to document the process though. The sewing room was out of action briefly as it was being used as a store room whilst we had guests so you’ll notice this time I wasn’t able to craft on my trusty purple desk but rather on an occasional table in the lounge, it’s a happy accident that the dark wood adds quite a nice heritage style effect. 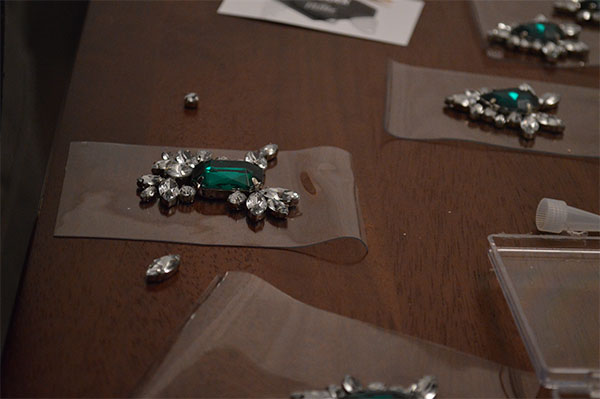 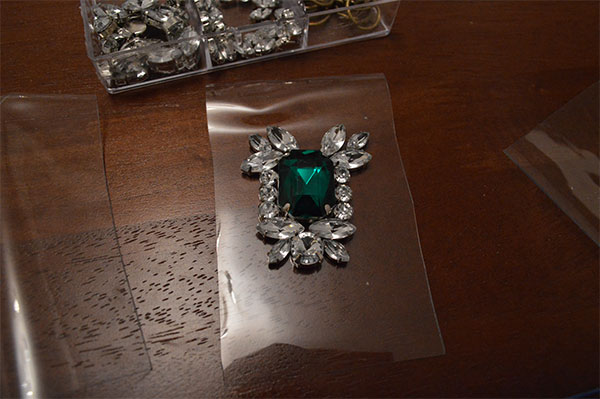 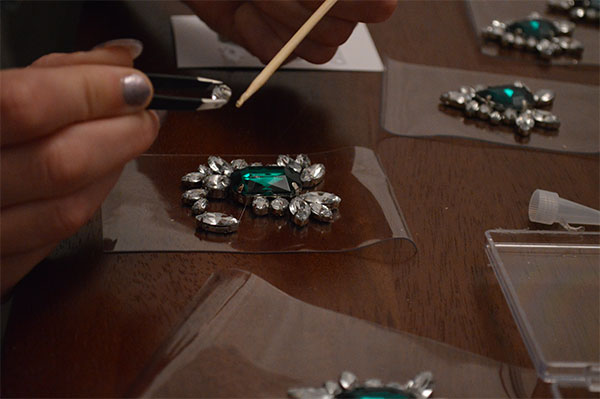 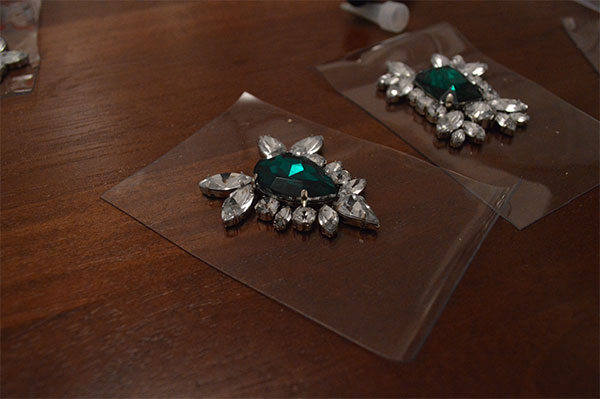 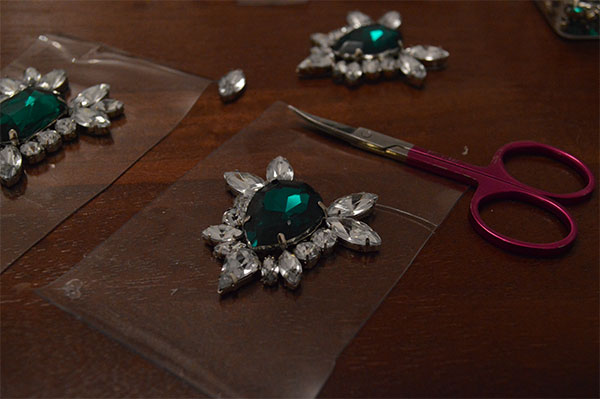 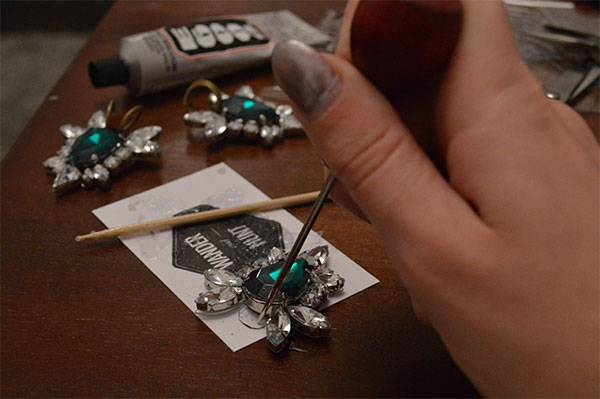 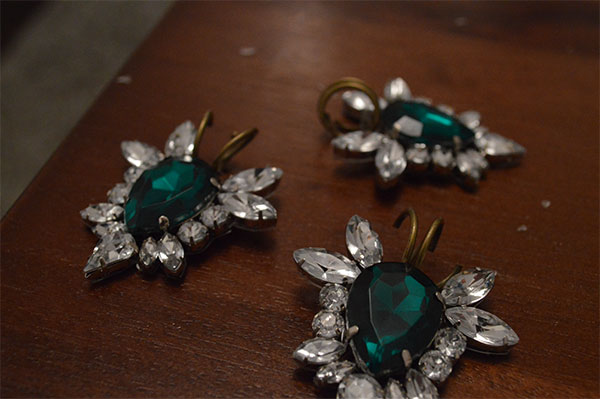 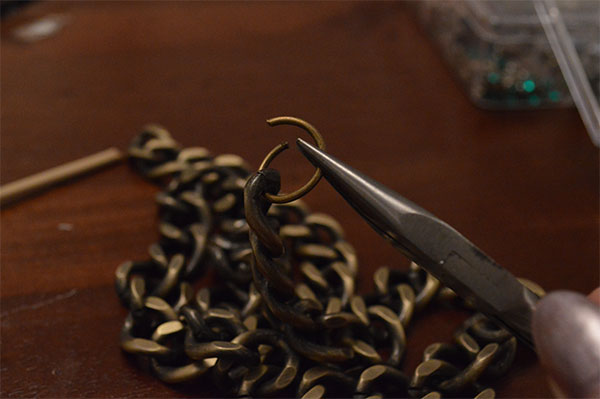 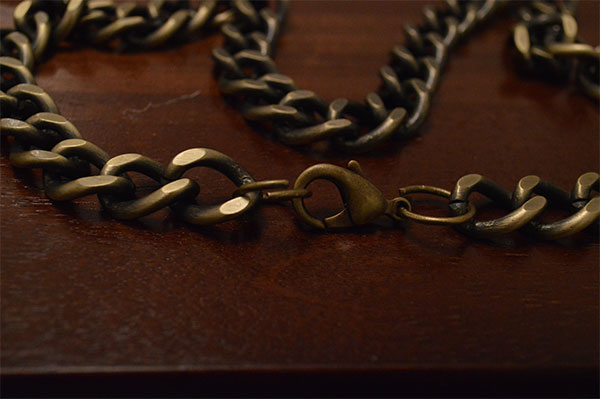 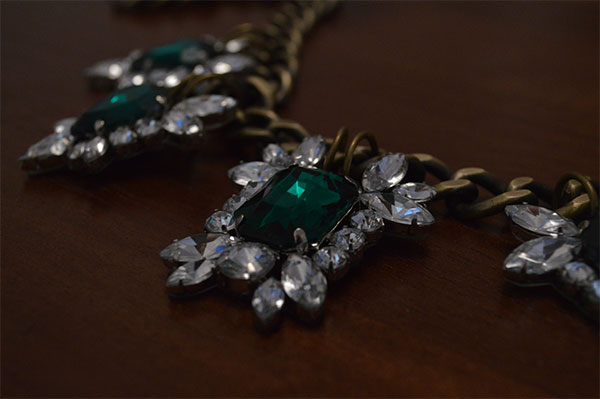 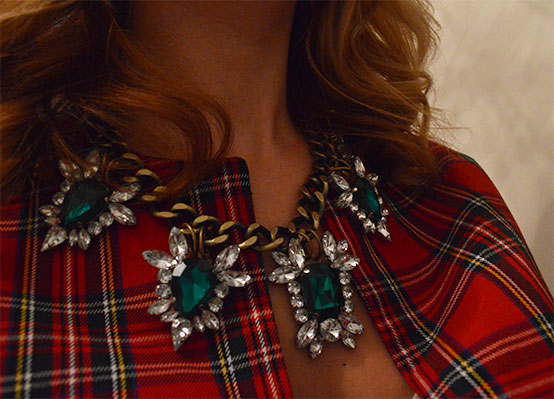 This necklace was one of the most enjoyable things I’ve probably ever made! There’s something very satisfying about positioning the rhinestones and glueing them into place! You need to be quite liberal with the glue on the stones,  I’ve had a couple of occasions of the odd one that isn’t as secure as the rest coming loose but once securely glued back into place they’ve been fine.

The beauty of the kit is that you don’t have to make the same necklace as on the pictures, you can make your own arrangement of gems just as easily.  I followed the photos but made a small adjustment to the central pendant and used a couple less jewels as it was a bit big for my taste. The necklace has been attracting a lot of compliments despite it’s glamour can easily be worn over a t-shirt and jeans as well as with a party dress. It’s also now available in 2 extra colours – blue and smoky quartz – as well as the emerald featured above. I’ve also invested in their Rhinestone Kit so I’m getting ready to come up with some jewellery designs of my own soon!